Join us for Unscripted: The Frontliners 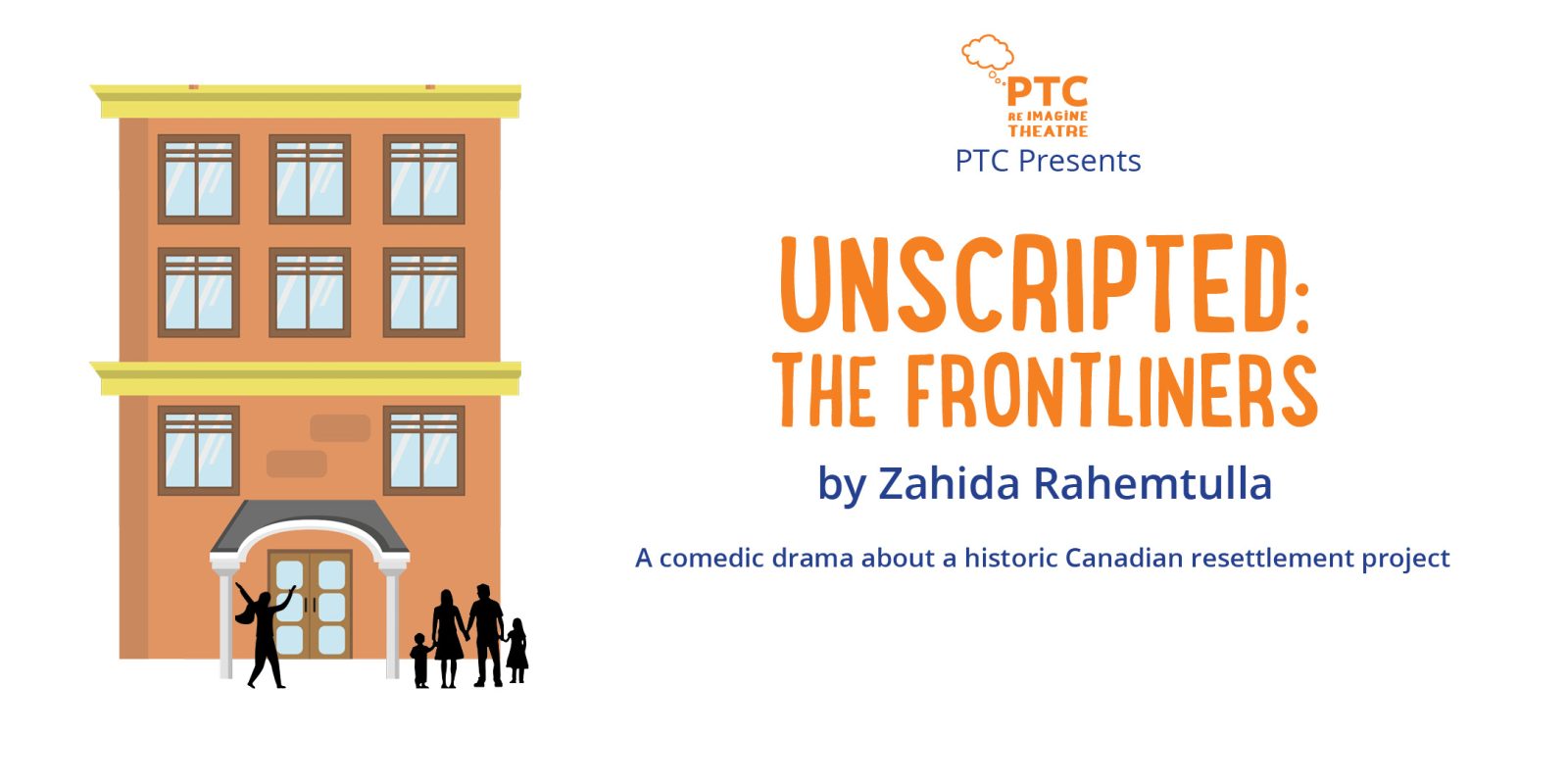 PTC’s Unscripted brings playwrights, audiences, and the imagination together.

Vancouver, BC 2016: It is late January 2016 and Canada is in the throes of resettling the first wave of 25,000 Syrian refugees. As three frontline workers battle Vancouver’s housing crisis to move families out of an East Van hotel, their lives are brought together in ways that irreversibly shape them.

Join the frontlines of 2016 when Canada started resettling 25,000 refugees!

A comedic drama about a historic Canadian resettlement project

PTC is back online with UNSCRIPTED: The Frontliners. Join our New Play in Development Prize winner, Zahida Rahemtulla with co-host Davey Samuel Calderon (Dramaturg, Public Engagement & NPiDP Dramaturg) and learn about working on the frontlines during the intake of refugees to Canada back in 2016, today, and even in Canada’s future.

This upcoming stream features a mix of live and pre-recorded conversations with expert speakers and audiences engaging via Youtube Live. UNSCRIPTED allows for deeper conversations about the representation of minority groups and their narratives in theatre, the immense pressure immigrant frontline workers are under during a refugee crisis, and larger conversations around how newcomers are and aren’t portrayed in news and media. You’ll also get a sneak peek of The Frontliners development as we share some original sound design for the play (design from the talented Heather Kemski) and a scene excerpt read by our talented workshop cast.

Zahida Rahemtulla is a playwright and short story writer currently based between Vancouver and Toronto. She has been a resident at the Banff Centre in Alberta, the Stratford Theatre Festival, and Millay Colony for the Arts in New York. Her first plays, The Wrong Bashir and The Frontliners, have been shortlisted for many awards, including the Playwrights Guild of Canada Surefire! Lists, the Ellen Ross Stuart Playwriting Award (Tarragon Theatre & Ontario Arts Foundation), the Voaden Literary Prize, and won the 2021 RBC Emerging Playwright Award and a national Silk Road Institute Award. Her stories have been shortlisted for the Alice Munro Award and longlisted for the CBC short story prize. Zahida has worked for several years in Vancouver’s immigrant and refugee nonprofit sector in the areas of housing, employment, and literacy. She is currently studying Adult Education at the University of Toronto. The Wrong Bashir will premiere as an audio play with the Arts Club Theatre Company in March 2022, and The Frontliners will premiere on stage live with PTC’s New Play in Development Prize in September 2022.

Gulalai Habib
Working with displaced populations in Canada and abroad for over 25 years,  Gulalai Habib was a former Program Officer with United Nations Development Program (UNDP); experienced in community centered engagement in Central/South Asian regions; and involved with grassroots women’s mobilization and community organizing among displaced populations. Since coming to Canada as an Afghan refugee, she worked for over fourteen years with the Resettlement Assistance Program of ISSofBC, with direct oversight of the Syrian operation, and intimate involvement in the broader restructuring of Settlement sector spaces to include the lived expertise of refugee/migrant professionals. She went on in this capacity to cultivate a community-centred settlement vision, and currently serves as the Director of Settlement and Integration Programs at Burnaby Neighbourhood House; and sit on the Board of Directors of the national Women’s Economic Council.

Bal Brach
Bal Brach is an award-winning broadcast journalist with nearly two decades of experience working in newsrooms across Canada.  She has been a producer and reporter for the country’s major news networks — CTV, Global News and CBC News.  In 2016, Bal was awarded the highest honour in B.C. journalism — a Jack Webster award for her continued coverage of Syrian refugee resettlement. She is also the recipient of multiple regional and national Radio Television Digital News Association (RTDNA) awards. Bal’s digital storytelling skills have been recognized by the Alberta Media Production Industries Association (AMPIA) and the Academy of Canadian Cinema and Television. In 2017, Bal was a finalist for a Canadian Screen Award — celebrating excellence in film, television and digital media. Currently, Bal spends her time working on independent projects through her company Wrise Productions Inc. She also continues a working relationship with Canada’s public broadcaster, as a guest host on CBC radio.

Oussayma Canbarieh
Oussayma is an award-winning Canadian journalist based in Montreal.  She has produced hundreds of pieces for radio, TV, and the web. Oussayma worked on a wide range of subjects from Canada, the US, the Middle East, North Africa, East Asia and South East Asia. Oussayma has also produced several TV series and Web documentaries. Her work has been featured on national and international media outlets, including CBC/Radio-Canada, Radio Canada International, CBC.CA, Al Jazeera, AP, Deutsche Welle Radio, Huffington Post, AJ+, Asia-Pacific Institute for Broadcasting Development, SNTV, Bell Local, Châtelaine, Les Affaires, the Montreal Gazette and CUTV.  She also trained and mentored journalism students and aspiring media makers. Oussayma has been awarded the Lys de la Diversité Prize for web-journalism in 2013. She’s also the recipient of LOJIQ journalism bursary.  Oussayma has also been nominated for one of CBC/Radio-Canada President’s award in 2012 for her web-documentary. Oussayma studied Business and Journalism at Concordia University, she’s travelled to more than 40 countries and also works as an interpreter in English, French, Arabic and Spanish.

See our Unscripted page for full collaborators and cast bios.

PTC would like to thank Canadian Heritage and Canada Council for the Arts.

This project has been made possible in part by the Government of Canada.

The playwright gratefully acknowledges the support of the following people and institutions in the development of The Frontliners:

This play is being developed through the 2021-2022 PTC New Play in Development Prize. Dramaturgy by Davey Calderon.

PTC acknowledges the sovereignty of the xʷməθkwəy̓əm (Musqueam), Skwxwú7mesh (Squamish), and Səl̓ílwətaɬ (Tsleil-Waututh) Nations on whose traditional, unceded and occupied territories we live and work.