In The Realm of “What Does A Dramaturg Do?”: Puzzling Beginnings

A friend of mine is fond of a particular kind of jigsaw puzzle – the 1000+ piece ones where the picture you are trying to complete is not shown to you. Instead, there are two types of pictures you are putting together: in one you see a scene of riotous action set in a particular location, and the picture you are completing is the equivalent a few decades later; in the other, you see a complex multi-character scene of reaction, and the one you are making is the scene that caused the reaction.

Either one of these could be analogous to the beginnings of a dramaturgical relationship with a writer and an idea that hasn’t yet become a script. The early work is to design a research process that is broad enough to catch the muse that will drive the piece and narrow enough to assist in creating a rough theatrical form for sharing the ideas with other collaborators and the audience.

This is a huge amount of intellectual fun.

Take Victim Impact by Tim Carlson for instance. I’m working with Tim and Theatre Conspiracy on this piece about the fallout from a Ponzi scheme. He says it began as a revenge fantasy regarding someone he knew who was victimized, then grew into a research interest, and now we’re working towards a script concept. We’re covering the basics, like learning to explain in various media what exactly a Ponzi scheme is – essentially, a rob-Peter-to-pay-Paul scheme where money is used from later investors to pay earlier investors in a business that turns out to have no product or investment. Person X takes your investment in the oil well in Panama, pays you dividends from later investments, and when the scheme inevitably collapses as

too many people try to take their money out, you discover that there is no oil well or, if there is, Person X (and you) has no share in it. If you were an early investor who took out your principal early, you may even have made money, albeit not as much as the paper profits declare. If you were a later investor, well, you lost it all.

There are books written about famous Ponzi schemes, including the biography of Carlo Ponzi, whose name has come to represent the whole category of fraud. I just read an account of Bernie Madoff by Diana Henriques The Wizard of Lies – coming soon to HBO. There are many more. There are also websites and documents from court cases, and legal opinions, and complex financial explanations of all sorts of things. We devour these. Tim and I are following some court cases through their paper documents. Our first field trip is to go to the court appearances of Rashida Samji, an operator of a Ponzi scheme in BC. We are preparing for interviews with lawyers and accountants and especially with victims of Ponzi schemes. Naturally, there are protocols and agreements to be made for ethical use of documentary material and real stories. As with anything worth doing, the more you find out, the more complex it gets.   Eventually you find yourselves imagining a few vague theatrical forms.  When that happens, I will narrow my research instead of widening it, and Tim will start the first draft he expects to have ready in September.

The other piece in early stages that occupies my mind and time is Deneh’Cho Thompson’s The Girl Who Was Raised by Wolverine, which is this year’s Fringe New Play Prize winner. By September, he will have a version of this play onstage at the Fringe, so we keep that in our minds as we design the development of this piece.  The Fringe play will be a stand-alone iteration, not necessarily the final version, which is intended to be ready for the 2017 Talking Stick Festival, or perhaps Weesageechak at Native Earth Performing Arts, or SFU – or NAC – a future life, further developed. Deneh dreams of taking it up north. 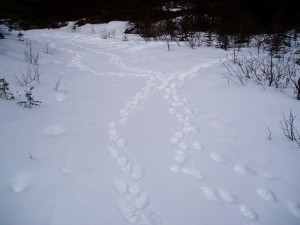 The Girl Who Was Raised by Wolverine owes one of its central figures, Wolverine, to tales from the Dene people of the North. It is intended to be a modern telling of a personal story modelled on traditional Dene stories, using the tools and vocabularies of Eurocentric theatre training ­and the protocols of the nations that own the Wolverine tales. We are relying on conversations about Indigenous Dramaturgy with Deneh’s collaborator Lindsay Lachance. And we are talking and researching protocols around the rights to tell certain stories, the use of private and family names, the philosophies that challenge the relationships among collaborators. Deneh is seeking out sources of knowledge about blanket games, which are northern competitions between groups, perhaps related to the gift economy, which may offer a framework for the piece. At the same time he looks for a media designer to work with. Meanwhile, I have found a book of wolverine tales, books about the Trickster figure, and books about the misappropriation of the Trickster figure. These things make our conversations about the form and intention of this theatre piece rich and complex. We talk about them even as we begin to talk about the world of Deneh’s play and how it will be manifest on stage.

These are two of my new collaborations. Like my friend’s favourite jigsaw puzzles, in both projects we have only the vaguest clues about where we’re going, and we’re building the path (process) and the frame (structure) as we go along. This Lunar New Year brings in the Fire Monkey, so things are going to be volatile, which may explain why we already feel like worlds are alive and require constant adjustment to shifts and balances.